Cover Reveal: The Dark Side by Cyci Cade 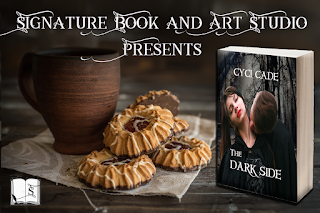 The Dark Side
by Cyci Cade
Nocturnal Secrets Book 1

“At that moment, he notices how vulnerable he is in front that creature; his life hangs by a thread—or what will remain of it if he doesn't die due to the severe burns.”

“Condemned to the eternal solitude, he wants to live his best possible life because he will have too many centuries of existence and he doesn't need to carry the weight of the guilt for had killed uncountable people to satiate his hunger.”

Ivor Alastair has many plans for his future, but they are frustrated when his parents are murdered. In danger, he cannot stay in the city he grew up and have friends anymore. Forced to move to London to live with his uncle, Ivor tries to restart his life. However, a new tragedy devastates the small family.

Alone and devastated, Ivor feels lost and without strength to move on. After a year traveling to forget his past and erase the sorrow, he discovers that it will not be so easy.

Back to London, Ivor sees his life change again when a mysterious creature with an incredibly white skin that seems made of marble and red eyes that demonstrate a frightening ferocity crosses his way.

An unexpected encounter with Arabella makes Ivor think that his loneliness will stay behind; as decades pass, he realizes that he is more alone than never.

Decided to change his story, Ivor makes a decision. He will not kill anymore!

Ivor Alastair lost his parents, house, and life. Now, he will have to restart, but will it be possible?

Arriving at Alastair´s Mansion—as his house is known due to its grandiosity—Ivor takes the way to the kitchen as usual and enters believing he will find his mother there as usual. The fire is lit, but the kitchen is empty. The maid had already gone, and the food is burning. He narrows the brows and goes to the dining room foreseeing that there is something wrong.

He calls for the parents, “Mother? Father? I´m home. I hope I´m not late.”

The table wasn´t set yet. Something strange was happening. At that time, his mother would be serving dinner instead of leaving the food to burn in the kitchen. Ivor goes to the living room—short and silent steps, attentive eyes. The few candles reveal the fallen bodies in the middle of the room—his parents.

Ivor grasps a candle and runs to them—his heart beating fast and loud. He kneels next to the bodies; with trembling hands, he tries to wake them up. His gestures are delicate at first, but they become stronger when he doesn´t get any response. His parents are dead. When he examines the bodies, he finds bullet wounds.

Fire guns killed his parents, but who could have killed them? They are people good—hard-working people. His father helps many local and non-local residents. Was that a robbery? What will he do now? Will he call the police?

He rises and runs his trembling fingers through his hair trying to control the breathing and the tears that start to blur his vision. Even before thinking of going to the police station, a sound freezes him and chills run through his spine—it is the creak of the free board at the top of the stairs to the second floor where there are the rooms. Ivor would recognize the sound from miles away. He isn´t alone; the murderer is climbing down the stairs.

Paralyzed, he awaits the intruders to approach him. Two masked men point their guns to his direction. Ivor wide-opens his eyes and mouth. Before the first shot, Ivor runs outside taking the same corridor he used to enter the house. He can hear the men's heavy footsteps from a short distance.

Ivor runs to the forest in an attempt of misleading them. He played in that place during his whole childhood; he knows the forest—as well its nocturnal dangers. Though, it is his only choice. Or he stays and dies by the hands of his parents' murderers, or he takes his chances in the dark forest and maybe survives the attack.

He jumps over branches fallen on the ground for a long time and goes up and down small hills avoiding the trails he knows that it will lead him to natural traps; he goes deeper and deeper into the forest that surrounds his house. The light of the twilight limits his vision, but also their parents' murderers' vision.

The men continue to shoot at him. Without seeing the trail that he used to take, Ivor stumbles but keep moving fast—for a moment he thinks that he is lost.

There´s another shot and the lateral of his abdomen burns. He presses his side and notices that the shirt glues to his body; it is damp, sticky. His legs lose strength; they become heavy and don´t obey his commands. He cannot stop! He needs to continue.

Again, the sound of the weapons arrives in his ears—now, it´s higher and stronger. Ivor loses his balance with the blow. The bullet hits his shoulder that becomes numb; his arm loses the movements, and the pain spreads through his body.

He reaches the bridge that cuts the forest. He hadn´t imagined that he was so distant from his house. He stops—his sore body leaned forward, his breathing laborious. Ivor looks to the side and sees the men approaching him. He can´t continue anymore. A split second passes, but it seems an eternity.

Leaning on his good arm, he passes over the railing of the bridge and looks for balance in the lateral of the bridge. The heavy footsteps of the murderers become more audible.

Ivor breathes deeply several times. When the shots restart, he jumps into the river. The air escapes from his lungs when his body reaches the strong currents of the river with violence; his vision goes black. His body spins in the cold water, submerging and emerging many times while the water carries him away. The shots cease; his senses abandon him.

Other titles by Cyci Cade: