A Pinch of Romance, Please! 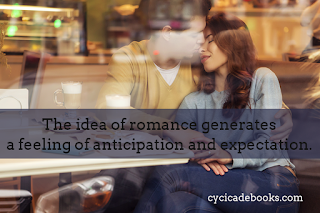 Romance is an important part of a good fantasy novel. It´s the element that helps the plot flows enticingly and seductively. It turns things more fascinating.

I believe 99% of the books I´ve read are romance fantasy novels; they are my favorite genre, and a significant part of the readers has the same opinion. Do you know why? Because the idea of romance generates a feeling of anticipation and expectation.

I believe everybody wants to love and be loved. Okay, there are exceptions. There are readers tired of romance; they want something different. Maybe the world where creatures fight for power, solitary dragon´s slayers, an epic battle between the god of chaos and the god of the sun, and so on.

I have a theory. God created the man; then He created the woman because He thought it wasn´t good for the man to be alone. He created males and females to form couples. Therefore, this feeling is rooted deep inside of all creatures. As I said, there are exceptions.

There are fantasy books without romance. They exist. Where are they? I don´t know! Not in the best-sellers´ list. Not at the top list of Amazon, Barnes & Noble, and others bookstores. I´m sorry if you don´t like romance, but it is a fact.

In a high or low level, the idea of romance between the characters adds more emotion to the story and rouses strong expectations. Why will a prince fight for his kingdom if in the end the book he doesn´t have a princess to share his accomplishments?

It reminds me one of Arnold Schwarzenegger´s movie—Conan – The Barbarian. At the end of the film, he sat on a throne alone. He made everything to save Valeria, but he failed. He ended alone. It wasn´t the end I was expecting. It was frustrating.

The main point is, why to fight for power, save the world, or accomplish great things if, in the end, the character is alone? It doesn´t have much sense.

It seems that romance fills a gap even an excellent fantasy story is unable to fill. Do you think that Twilight series would be a success without romance? What about Divergent series? It´s dystopian, I know, but the principle is the same. What about Harry Potter? It started as juvenile books and evolved to young-adult books as the characters grew up, as well the audience. J.K. Rowling understood what readers wanted—a pinch of romance.

How to find balance? I suggest you follow the bestsellers´ list and the reviews of those books. After that, read them and learn how those writers have added romance to their stories. Then, you´ll have an idea how to add romance to your book—or not—it´s your choice.

Remember, a project is ready when you decide that it´s ready. You can always edit your manuscript and make the necessary arrangements.