Blurb: The film is a reboot of the King Kong franchise. In 1973, former British Special Air Service Captain James Conrad (Tom Hiddleston) is hired by government agent Bill Randa (John Goodman) to guide an expedition to map out an uncharted island in the Pacific Ocean known as "Skull Island".
Randa also recruits the Sky Devils helicopter squadron led by Lieutenant Colonel Preston Packard (Samuel L. Jackson) to escort them to the island, and the group is later joined by pacifist photojournalist Mason Weaver (Brie Larson), who believes the scientific expedition to be a cover for an illegal military operation and plans to expose it. The helicopters are suddenly attacked by an enormous ape known as Kong, a type of god and protector of the island.


Comment: After Kong´s attack, the team is separated into small groups. Many soldiers and some civilians are dead and they must to regroup and move northward to leave the island. Insane, Packard wants to kill Kong to revenge his soldiers´ death. However, Kong is the only creature capable of fighting scary creatures that live underground and were released by the intruders.

It´s a sort of sequence of the last movie. Bill Randa wants to prove that exist an island with prehistoric creatures, therefore, he recruits a team to explore the island and expose the creatures. However, nobody knows his true intention.

It´s a fast-paced story with many fighting scenes. The team who arrives at the island to explore it has to face the consequences of its acts. Many lose their lives and the ones who survive must fight incredible creatures to escape the island. Kong isn´t the creature they must fear.

The monstrous ape is good. He doesn´t intend to inflict any damage to the human beings, but he attacks the helicopters destroying them, as well many soldiers. On the other hand, he protects some members of the group. Trust is a thing that takes a time to build. It didn´t convince me.

Come on! Kong is an animal with instincts. Those people hurt him! How does he know who are the good ones and the bad ones? It´s too farfetched.

The visual effects don´t impress very much. Some scenes are a blur of pixels.

The movie has a sense of humor and some funny scenes that break the tension a little.

The item romance isn´t ranked because it doesn´t apply to the movie. 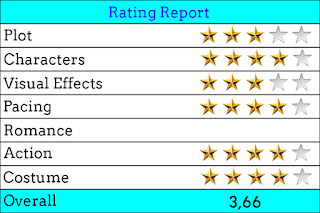 March 23 is the last day to download Son of Egypt for free. Don´t waste time. Sign up for my newsletter and get yours now!