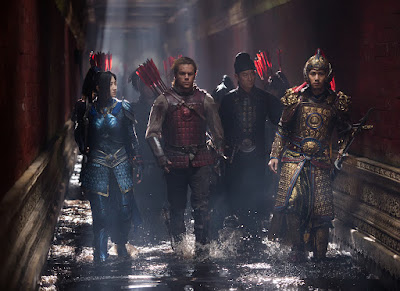 Blurb: In the time of the Song dynasty during the reign of the Renzong Emperor, a few miles north of the Great Wall, a mercenary group originally consisting of twenty men searching for black powder are pursued by Khitan bandits, who have already killed some of the men. Upon escaping they seek refuge in a cave but are then attacked by an unknown monster, leaving only William and Tovar alive, with the former having slashed off the monster's hand.

The two decide to bring the arm with them. The next day, they stumble upon the Great Wall and are taken prisoner by Chinese soldiers of a secretive military sect called the Nameless Order, led by General Shao and Strategist Wang to repel a horde of alien monsters called Tao Tie who rise every 60 years.


Comment: Chinese culture is so rich with so many legends and mythical creatures; it fascinates me and will fascinate the fans of fantasy stories too. There are many scenes that you make your hair stand on end.

The Great Wall is an impressive monument built to protect China. However, nobody knows why it was built—it is a secret. However, when William and Tovar arrive in the wall and are arrested by the Nameless Order, they discover a way to defeat the Tao Tie. Facing an imminent attack, William and Tovar have to join the Chinese army and fight the monsters to save their lives.

With a well-written plot, wonderful visual effects, and amazing costumes, The Great Wall offers a story full of action, adventure, and surprises. There is a lot going on to keep you watching. The brawls are busy and brutal and the Crane Troop is breathtaking.

The Nameless Order is divided into five special units and each unit has a different armor. 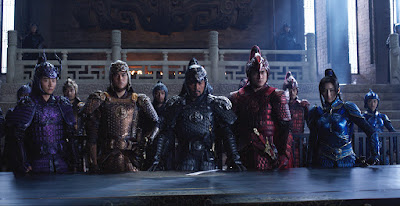 The moment the women jump from the crane with spears in hands to attack the monsters that are approaching the wall is phenomenal. You´ll hold your breath because you´ll feel as if you are jumping too. Another hair-raising moment is when they play the drums.

When William and Tovar´s goals diverge, William is forced to pick a side. He has in his hands the opportunity to become a rich man, but will he do it? A relationship that seemed unbreakable starts to collapse. The scenes they are together are funny. Matt Damon and Pedro Pascal work well together.

I liked the idea of romance between William and Lin Mae, the tension between the couple is palpable. They are always flirting and when you think that something will happen… Well, I won´t tell what happens, but I´m frustrated.

I expected a different ending, but I really loved the movie. 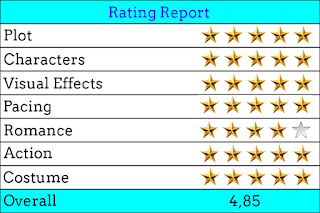 March 23 is the last day to download Son of Egypt for free. Don´t waste time. Sing up for my newsletter and get yours now!