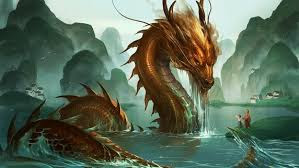 Chinese dragons are legendary creatures commonly depicted as snake-like with four legs. They symbolize potent and auspicious powers, strength, and good luck. They have control over water, rainfall, typhoons, and floods.
The dragon is associated with the Emperor of China and used as a symbol to represent imperial power.

The ancient Chinese self-identified as "the descendants of the dragon" because the Chinese dragon is an imagined reptile that represents evolution from the ancestors and qi energy.

Many pictures of oriental dragons show a flaming pearl under their chin or in their claws. The pearl is associated with spiritual energy, wisdom, prosperity, power, immortality, thunder, or the moon. Chinese art often depicts a pair of dragons chasing or fighting over the flaming pearl.


Chinese dragons are occasionally depicted with bat-like wings growing out of the front limbs, but most do not have wings; their ability to fly, control water, etc. are mystical and not seen as a result of their physical attributes.

The dragon has also acquired an almost unlimited range of supernatural powers. It is said to be able to disguise itself as a silkworm, or become as large as our entire universe. It can fly among the clouds or hide in water (according to the Guanzi). It can form clouds, can turn into water, can change color as an ability to blend in with their surroundings, as an effective form of camouflage or glow in the dark.

In some circles, it is considered bad luck to depict a dragon facing downwards, as it is seen as disrespectful to place a dragon in such manner that it cannot ascend to the sky.

There are nine types of classical Chinese dragons:

1-Tianlong, the Celestial Dragons, are dragons who pull the chariots of the gods and guard their palaces.
2-Shenlong, the Spiritual Dragons, control the wind and the rain.
3-Fucanglong, the Dragons of Hidden Treasures, are underworld dragons which guard buried treasures, both natural and man-made. Volcanoes are said to be created when they burst out of the ground to report to heaven.
4-Dilong, the Underground Dragons, are earth dragons whose task it is to preside over rivers and streams. According to some accounts, they are the female counterpart of the Shenlong and they fly only in order to mate.
5-Yinglong, the Winged Dragons, are the oldest of all eastern dragons and the only kind with wings.
6-Qiulong, the Horned Dragons, are considered to be the mightiest dragons.
7-Panlong, the Coiling Dragons, are water dragons believed to mostly inhabit the lakes of the Orient.
8-Huanglong, the Yellow Dragons, once emerged from the River Luo and presented the legendary Emperor Fu Hsi with the elements of writing. They are known for their scholarly knowledge.
9-Lóng Wáng, the Dragon Kings, are rulers over each of the four seas, those of the east, south, west, and north. Although their true form is that of a dragon, they have the ability to shapeshift into human form. They live in crystal palaces guarded by shrimp soldiers and crab generals.