A mythical bird that never dies 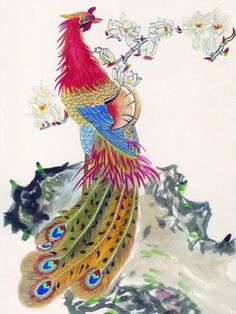 In China, the phoenix is considered a symbol of heaven´s favor, grace, virtue and grace, luck and happiness. It is also considered one of four sacred creatures (Turtle, White Tiger, Red Bird or Phoenix, and Dragon).
The phoenix has the head of a cock, which symbolizes the sky (the eyes are the sun); the back of a swallow as the crescent moon; the wings are the wind; the tail represents the planets; and the feet are the earth. The phoenix also represents the element fire.

The symbol of phoenix has appeared on objects in China for over 7000 years, often in jade and on good-luck totems. It is depicted in a pair, male and female phoenix, facing each other.

In Chinese mythology, the phoenix is represented by Feng Huang—Fen-male; Huang-female— which personifies the primordial force of the heavens, and reigns over all the other birds. It´s originated from fire being born in the “Hill of the Sun´s Halo.” It´s plumage comes from the five fundamental colors: black, white, red, green, and yellow.

It is believed that the phoenix only appears in blessed areas and marks the beginning of a new era; it lives in the Kulun Mountains in northern China.

In Greek mythology, the phoenix is a long-lived bird that is cyclically regenerated or reborn. The bird obtains new life by arising from ashes of its predecessor. According to the legends, the phoenix dies in a show of flames and combustion and can live 1,400 years before rebirth.