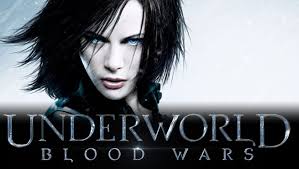 Blurb: Vampire death dealer Selene (Kate Beckinsale) continues her struggle against the Lycan clan and the Vampire fraction that betrayed her, with both sides trying to use the blood of her and her daughter to become Vampire-Corvinus hybrids. After hiding her daughter, Selene, David (Theo James) and his father Thomas (Charles Dance), attempt to end the eternal war between Lycans and Vampires, though it may cost Selene her life.
Comment: First of all, I must say that the fate of some characters disappointed me; I expected something different and more exciting.

I´ll start asking a question: Is David in love with Selene? What do you think?

As the other movies, there are action, fight, betrayal, and blood—much blood. Both Lycans and Vampires´ clans want Selene—and her daughter—for different reasons. Selene is willing to do anything to protect her daughter, and David to protect Selene.

David and Selene work together great part of the movie and their partnership works very well—they form a good team and have the same goal. The fighting scenes are impressive, well choreographed, and with a good rhythm.

At the beginning, they don´t trust anybody; when they decide that they must trust somebody, they realize that it was a big mistake and pay a high price for this unwise decision.

There isn´t much information about Marius—the Lycan leader, who wants Selena´s daughter. His plans are veiled, as well his origin that is revealed only in the end of the movie. I think they should have explored this character a little more.

Selene has a lot to handle in Blood Wars, David too. She feels like losing everything—everybody—while David discovers his true origin and why his father lied to him. Both of them must make difficult decisions and face their worst enemies to save themselves and their species.

The plot is captivating and the scenario is breathtaking. The movie flows in a rushed rhythm—there are lots of things happening—and is attached to the main idea. The effects are perfect; even being a vampire movie, great part of the scenes happen during the day or in an illuminated place.

I liked the movie, and you? Have you watched Underworld: Blood Wars?