Mysteries of the Great Sphinx 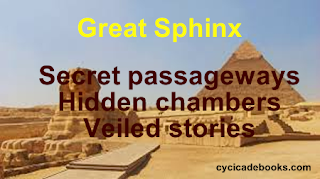 Veiled stories, secret passageways, concealed chambers… there are an air of mystery around the Great Sphinx that causes speculations and gives credence to many theories. The Great Sphinx also gives room to unbelievable fantasy movies and books.

Buried for a long time in the desert sand, the Great Sphinx is located on the Giza plateau—on the west bank of the Nile River. It faces the rising sun and is placed at a short distance from the three large pyramids—Khufu, Khafre, and Menkaura.

Part of the head has been badly damaged during the years. Some believe that the original head had a lion shape and a pharaoh—Chephren—changed the original project to depict his face. Considering the head is out of proportion to its body and the missing parts, it´s easy to believe that erosion—or men´s intervention—changed its format.

The mystery of the Sphinx´s origin and purpose has raised controversial and mystical theories. Some believe that its purpose is to protect the Great Pyramids; others believe that the monument keeps a sealed room that contains the records of Atlantis, the development of the peoples, the building of the pyramids…

Tunnels and pathways have been discovered, as well evidence of anomalies in the form of hollow. Clairvoyant Edgar Cayce saw during a trance that refugees from Atlantis buried their secrets in the hall of records under the Sphinx; this hall would be discovered before the end of the 20th century.

Archeologists believe the Sphinx is 10,000 years old and the monument—as well some parts of the Giza complex—make up a sacred apparatus designed to harness the power of the sun to sustain the earthly and divine order.

The Sphinx was carved from a single mass of limestone. It is 66 feet tall and 240 feet long. It´s symbolism is unclear, however, inscriptions refer to Ruti—a double lion god that sat at the entrance to the underworld and guarded the horizon where the sun rose and set. There´s evidence of the existence of another Sphinx, but it hasn´t been found yet.

Legends have been told about the Great Sphinx. People had to answer its riddle, if they couldn´t, they´d be killed or eaten by its ravenous monster. One story says that a young prince fell asleep next to the Great Sphinx—he had been hunting all day and he was tired. He dreamt that the Great Sphinx promised that he would become the ruler of Upper and Lower Egypt if he cleared away the sand covering its body—the Sphinx was covered up to its neck. The rest of the story is gone.

Do you know some interesting fact about the Great Sphinx? Share with us.

For a LIMITED TIME you can download Son of Egypt A Short Story for FREE.