It happens on Friday: Kat Ross reveals her books´ secrets 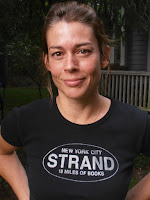 1- Tell us about you. Who you are, where you live and what you like to do during your free time.

So I'm a writer who moonlights as an editor, or maybe it's vice versa? I live just north of New York City, and just got into fantasy mapmaking as a sideline. So. Fun.

2- Where did you get the idea for the Fourth Element series? What can you tell us about the books?

The one-liner might be Gladiator meets Romeo and Juliet in ancient Persia. With magic. I just made that up, but it pretty much works! The plot is fast-paced, but the heart of the story is the things we do for love—and hate. When The Midnight Sea opens, the wealth and military power of the empire is intimately connected to the slavery of creatures called daevas. They can wield the elements of earth, air and water and make deadly soldiers. The priests teach that they're Druj—impure. But as the human protagonist trains with her own daeva, she comes to question everything she's been taught about them. So the first book focuses on her evolution and eventual rebellion, while the next two develop conflicts in the larger setting. I mean, what's epic fantasy without a diabolical demon queen?

3- Did you have to do any research?

Lots! The setting for the Fourth Element series is an alt Persian Empire during the Achaemenid period, about 330 BC, so it's a mix of fact and fiction (mostly the second). My last book was sci-fi, and I've also written an historical mystery, so I'm used to doing lots of research, but this was a bit different. It's the first time I had to design my own system of magic, with consistent rules, along with various other non-human species and a new timeline for an entire empire, so it was definitely a lot of work (and all that is still evolving). But I also wanted to be reasonably accurate about what people did and didn't have at that time, so every time a character needs a pair of scissors or something, I have to look that up! Some of the results have been surprising: for example, they had wigs but not rice (not until after the Islamic invasion centuries later). It can feel daunting at the beginning to create an entire world, but once my imagination starts flowing, it's one of my favorite things on earth. 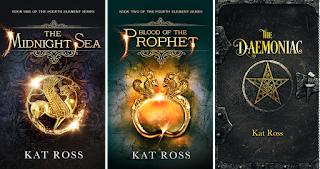 4- What is your favorite character?

For The Midnight Sea – Ilyas. He's such a hot mess. The perfect example of someone with good intentions who just screws everyone and everything around him royally. For Blood of the Prophet – Balthazar. He's so morally grey, I find him fascinating. Can such a person ever be redeemed? You'll notice, I tend to enjoy my bad guys the most!

5- What was your favorite scene to write? Most challenging?

I enjoyed writing the scene with Darius's trial before King Artaxeros II because it brought out all my most sadistic tendencies. Nazafareen gives this great, eloquent speech in his defense and hopes are raised that he might get off, only to be horribly dashed moments later. It's one of those scenes where everyone's pushed up against the wall and you get to see what they're made of.

The hardest part was definitely figuring out where to begin the story. I had a few false starts on that one. I loved my characters and plot, but the manuscript kept fizzling. I just knew in my bones it wasn't working. Then it came to me: I was opening my story way too late. So I backed up some, to the point where Nazafareen is first recruited to the Water Dogs, and everything fell into place. I find that in general, if you're having difficulty in the drafting stage, it's rarely true writer's block. There's something wrong with the story, and if you curl up and gnaw on it like a dog with a bone, you'll eventually discover where the problem lies.

6- Tell us about “The Daemonic”. Is it a prequel of book two “Blood of the Prophet”?

Not quite – it's a prequel to the next series, which will feature many of the characters from The Midnight Sea and Blood of the Prophet. So it's a bit different, more of a gaslamp fantasy. My nutshell for this one is Sherlock Holmes meets The X-Files. It's set in New York in 1888 and was my favorite book to write, ever. If you liked Caleb Carr's The Alienist, I think you'd enjoy this one too. Besides the (possibly) supernatural mystery at the center of the story, I worked in lots of juicy historical tidbits, like the insane taxidermied cat's head that Kate Fearing Strong, a.k.a. Puss, wore to Mrs. Astor's famous costume ball, and the entire town founded by mediums and spiritualists at Cassadaga Lake.

7- How do you get inspired to write?

I've given up on waiting for inspiration. Occasionally it's there, much of the time it's not. I just always knew that if I was going to finish a book, I had to do it in every spare moment or it just wouldn't happen. My formula of slogging a little or a lot every day has worked for me so far.

Of mine? Oh, hard. They're all pretty different. I enjoyed researching The Daemoniac the most because I grew up in New York and find it utterly fascinating how much has changed in the last century—and how much hasn’t at all.

9- Who are your favorite authors?

As far as a fantasy series goes, I adore the Wheel of Time books by Robert Jordan. The world he created is so rich and imaginative and intricately detailed, the magic system is awesome, and the characters are people you love or hate passionately. I can just read those books again and again. They're a gold standard of world-building.

10- Usually authors publish a book per year. Why have you decided to publish the whole series in 2016?
I haven't done it yet, lol! Seriously, I hope I make that December deadline, but the plot for Queen of Chaos keeps getting longer and more complicated. I think that's just the nature of a trilogy. You'd better tie up every single damn loose end or people will (justifiably) hate you. And I don't want to a disservice to my readers.

But hope springs eternal that it will get done before the year is out. Personally, I always hated those interminable waits for the next book in a beloved series, so I'm trying to speed up the process. J

The second Fourth Element book, Blood of the Prophet, comes out on September 12. A month later, on October 12, the first of my Dominion Mysteries releases. That's The Daemoniac. Once Queen of Chaos is done, I plan to focus on gaslamp fantasy, which blends Victorian-era atmosphere and intrigue with magic. The Daemoniac is sort of a prequel to that whole series, and will be followed by The Thirteenth Gate in January or February. Think gothic adventures with fabulous clothes, wicked sexy villains - and daevas, of course.

Blood of the Prophet: https://books2read.com/u/mK9Jw5

Well, we´ll have many books to read in the following months. I read The Midnight Sea (review) and Blood of the Prophet (review coming soon) and loved the books. I´m reading The Daemonic and it has surprised me. Kat Ross is a real Sherlock Holmes—or her character is.

If you like fantasy and mystery, you must read her books.
at September 09, 2016

Email ThisBlogThis!Share to TwitterShare to FacebookShare to Pinterest
Labels: Blood of the Prophet, interview, it happens on Friday, Kat Ross, The Daemonic, The Midnight Sea
Newer Post Older Post Home