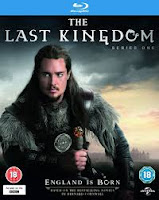 Blurb: The Last Kingdom is a ten episodes historical series based on The Saxon Stories (9 books) by Bernard Cornwell. Uhtred Ragnarson (Alexander Dreymon) is born a Saxon; when raiding Danes invade his land.

He disobeys his father´s orders and goes toward the war; he sees the enemy kill his father and faces the warriors looking for revenge. He fails because he is just a ten-year-old boy.

Earl Ragnar – a Danish warlord – adopts Uhtred; at the beginning, the boy is just a slave, but when he saves Earl´s daughter, the warlord starts to look to the boy in a different way. Uhtred becomes Earl´s adopted son.

Years pass. Uhtred grows up and watches other Danishes kill his adoptive family. He is accused of his family´s death and has to flee with his Brida (East Anglian), his lover and friend. As he doesn´t have where to go, he heads to Wessex and joins King Alfred against the Danishes.

A second series has been announced for a 2016 release.

Comment: Set in the late ninth century AD, Danes invade and rule the Anglo-Saxon lands; they are stronger, crueler enemies and pagans. Uhtred is a brave and wise warrior and good man; however, sometimes he is too naïve for a person who has faced so many things since his childhood.

He trusts people and pays a high price for it. He knows how to deal with Danishes, but not with Saxons. The Saxons deceive him and many times you wonder why Uhtred supports so many insults; he is very smart or too stupid. Has slavery broken him? Did he get used to serve?

At some point of the story, Uhtred doesn´t fit I anywhere; he is neither Danish nor Saxon, even so, he struggles to prove that he is an honest man who just wants to recover what belonged to his family. It´s impossible not to have a connection with Uhtred; he is a complex and captivating character.

You don´t know what to expect from him; he always does the opposite of what you´d do and it surprises you. Dealing with real issues like betrayals, losses, and great enemies, Uhtred describes his life among the Danes and the fights between Danishes and Saxons while he tries to find a place to live in.

It´s a historical drama, but has its moments of fun; it isn´t too heavy like Game of Thrones and boring like some historical series. The series explores England history instead of violence, nudity and sex; there are scenes of sex and violence, but they aren´t excessively explored like in Game of Thrones.