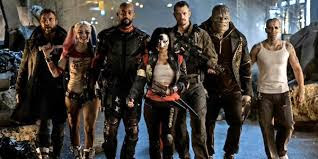 Comment: Suicide Squad is a sort of sequence of Batman vs Superman. Batman and The Flash appear in the movie to capture the villains. They should have imprisoned Amanda Waller too because she is a very bad person who forces the villains to obey her orders. She also forces Colonel Rick Flag to obey her orders.


In the beginning of the movie, when they present the villains you wonder how it will work because it´s clear that they don´t have any intention to collaborate or associate to somebody else. They have their own agenda.

Surprisingly, the improbable team works well when the members realize that they are in the same boat and they have to join forces to fight a common enemy.

The scenes are funny, but the plot is a little confusing. In the middle of the movie you don´t understand where they are going, what they are doing and who they are killing. You feel a little lost as if you have missed something.

It is an amusing movie. The actors and actresses did a good job representing so uncharacteristic and complex characters with so many particularities. They are crazy, unstable, and evil. But there´s the other side; after all, nobody is truly evil or truly good.

For sure, Suicide Squad isn´t the best DC Comics´ movie; far from it. It´s a sort of bridge from Batman vs Superman to League of Justice. You realize it in the beginning when they mention Superman´s death and during the post credits. Don´t miss the post credits!

It´s a good movie. I enjoyed it.