It happens on Friday: Ben-Hur

It happens on Friday - all about books, authors, TV series and movies. Do you want to participate? It´s easy! Just grab the logo, go to the form bellow, and enter your link title and url.

This week I have news about Ben-Hur—a new interpretation of the historical epic movie that won 11 Oscar. Ben-Hur 2016 production cost: U$ 100 million. It is the fourth film adaptation of the 1880 novel Ben-Hur: A Tale of the Christ by Lew Wallace.

The filming took place in Italy—Rome and Matera. To recreate the sequence, producers built 1,000 foot-long surface, unique chariots, and trained around 90 horses for several months to be able to race at 40 miles per hour. 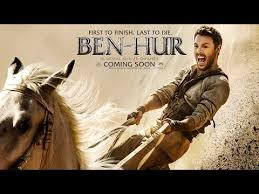 I watched the two last adaptations and I liked them. I´ve waited for this movie anxiously because the trailer is exciting. I´m curious to know if this movie will meet my expectations, they are high.

Plot: A nobleman, Judah Ben-Hur (Jack Huston), is falsely accused of assassination attempt by his childhood friend and adoptive brother Messala (Toby Kebbell). He survives years of slavery under the Romans and attempts to get revenge by challenging his adoptive brother in a grand chariot race while being forever changed after a series of encounters with Jesus of Nazareth.