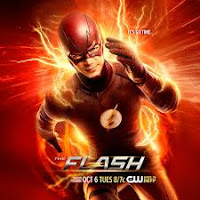 Blurb: The second season of The Flash consists of 23 episodes.

After the singularity that almost destroyed Central City, Barry Allen has to deal with his feelings; he blames himself for Eddie´s death and the destruction of part of Central City. Iris is suffering and it hurts him. He tries to restore the destroyed buildings as if he´s trying to restore his confidence.
To protect his friends, he puts them aside and starts to fight the meta-humans that come from Earth 2 by himself. It doesn´t work as he expects. He needs help to fight an evil that threatens Earth 1 and his friends.


Comment: In this season, Barry seems impotent to fight powerful enemies. He is the target. Zoom, a meta-human from Earth 2 wants to steal Barry´s velocity and he´ll use any source to get it.

Barry has to sacrifice many things to protect his friends and family. His friends are willing to help him, no matter what, but their efforts are insufficient to fight a veiled and powerful enemy.

In season 1, Barry struggled to overcome his mother´s death and prove that his father was innocent. In season 2, he blames himself because he couldn´t save his mother. In addition to that, another loss will destabilize him.

During many moments Barry is about to give up because he isn´t able to bear such heavy burden. If he gives up, who will save Central City?

He can´t watch those meta-humans destroy his world; he endangers his life. His efforts seem to be in vain when an unscrupulous Zoom kidnaps some Barry´s friends and blackmails Harrison to betray Barry.

Hurt, Barry makes a decision that can change the whole story.

Season two is full of surprises. In season one, Barry was strong, powerful, he was learning how to use his powers and limits, but he was strong. In season two, we find a broken Barry, who seems unable to fight his enemies. Have you noticed that it always happens? In the first seasons, super-heroes are powerful and strong, but then, they become fragile. I wonder why.

The season is full of twists that you can´t predict at all. You´ll have a big surprise when you discover Zoom´s real identity. There are complex characters and you don´t know who you can trust in. You´ll see a stunning world with shattered lives and determined and unforgettable characters.