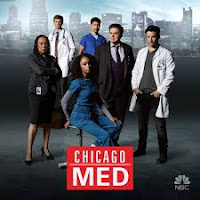 The series focuses on the emergency department of Gaffney Chicago Medical Center; doctors and nurses take different tasks to save patients´ lives while they have to deal with their personal issues.

NBC renewed the series for a second season; the season is set to premiere on September 22, 2016.


Comment: I´ll start saying that my favorite characters are Dr. Rhodes (Colin Donnell) and Dr. Choi (Brian Tee). The series is setting in the Hospital and each chapter tackles a problem, not just a disease, it´s deeper.

At the beginning when Dr. Rhodes joins the team, there are some disagreements; the staff members have to deal with their differences, but soon he shows his competence and why he occupies that position. He is strong and competent; however, he isn´t arrogant. I like these qualities.

The series is a little tense with some funny moments; step-by-step, those doctors and nurses show their commitment and accomplice to save lives, with some exceptions. There are the ones who don´t accept the way some doctors deal with complicated situations.

They want to save lives, no matter what, but there are rules, hospital rules, the law and the patients´ will. Some of them defy the system and pay a high price for it. What to do when a patient doesn´t accept a treatment or doesn´t want to be saved?

They have to face great challenges, make difficult decisions and at the same time face their inner issues in each episode. Who does not have problems, insecurities and traumas? The episodes are very well written, full of details and they have a good development.

Sarah Reese (Rachel DiPillo) is a character that evolves a lot. At the beginning she is an insecure fourth-year medical student who panics every time she has to treat a patient. She doesn´t feel inclined to emergency medicine, but at the end of the season, she becomes a great doctor. It is very nice to accompany her career.

I could describe all characters because they are so rich, but I´d have to write a book about Chicago Med. LOL.