Movie review: The Legend of Tarzan 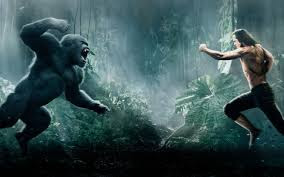 Blurb: As a result of the Berlin Conference, the Congo is divided up between Belgium and the United Kingdom. The Belgian government is on the verge of bankruptcy, having gone into heavy debt to build a national railroad and other infrastructure.
In response, King Leopold II of Belgium decides to extract the Congo's rich mineral deposits, sending his envoy Léon Rom (Christoph Waltz) to secure the fabled diamonds of Opar. Rom's expedition is ambushed and massacred, with only Rom surviving. A tribal leader, Chief Mbonga (Djimon Hounsou), offers him the diamonds in exchange for an old enemy; Tarzan.

In London John Clayton (Tarzan) is convinced to return to Africa when he receives King Leopold´s invitation because George Washington Williams wants to go with him to investigate the atrocities that have happened in Congo like slavery.

Comment: The movie starts a little slow. John Clayton is decided to leave behind his past and live a safe life with Jane—his wife—in his family´s mansion in London. He doesn´t want to confront his past, on the contrary, he prefers to forget it.

However, Will convinces him to accept King Leopold´s invitation. How could Tarzan ignore the fact that greedy people are exploring Tarzan´s friends and stealing Africa´s resources? He agrees with the trip but he wants Jane to stay in London. Of course she doesn´t accept his decision.

When they arrive in Africa, Tarzan encounters old friends, a group of lions. This is the scene that most touched me. The lions recognize him and welcome him. I won´t describe the scene in order not to spoil the moment. It is very fascinating.

The trio arrives in a tribal village where Jane grew up. During the night, Rom attacks the tribe and captures the natives, Jane and Tarzan; with Will´s help, Tarzan escapes, but he can´t save Jane.

To rescue his wife and release the natives, Tarzan faces the dangers of a wild jungle. He has to fight his ape-brother, Akut. The ape is the leader of their troop and doesn´t recognize Tarzan as one of them anymore because Tarzan is a deserter. This is the scariest scene. However, anything can stop Tarzan from saving his wife.

Meanwhile, Will makes an enormous effort to keep up with Tarzan who doesn´t slow down his pace to wait for the man who is decided to get proofs that Congo has suffered under those evil people´s command.

When he is in real danger, his ape-brother Akut and his troop appear to protect him. This scene made my hair stand on end. Tarzan was accepted in his troop again.

The Legend of Tarzan is a full pack of romance, adventure, action and wonderful landscape. The plot is captivating; it isn´t only a movie with excellent visual effects. The movie tackles issues like the elephants´ massacre to get ivory, exploitation of natural sources and rich mineral deposits, and slavery. It is the best Tarzan´s movie I´ve watched. The animals are perfect, scary, and they seem real.

Alexander Skarsgard (Tarzan) plays his role skillfully, he is a born Tarzan, they couldn´t have chosen better. He is strong, agile, and virile as a wild animal is supposed to be, but he is gentle, protective and kind as a lord is supposed to be. He balances the two sides with great ability.

Jane (Margot Robbie) is a strong woman; she grew up in Africa and she understands those people and animals. She doesn´t let her husband´s enemies intimidate her; on the contrary, she fights to help her native friends and endangers her life facing wild animals and evil men to protect them.

The visual effects are wonderful and transport you to Congo; you feel like you are part of the movie.

Well, I loved the movie. Without shadow of doubt this was the best movie I´ve watched this year. Don´t miss it!
at July 25, 2016