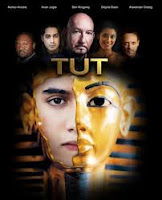 Tut is a three-part miniseries based on the life of Pharaoh Tutankhamun who lived for eighteen years. The boy king, as he was called, lived during the 18th dynasty and ruled Egypt between 1332 and 1323 B.C. He was married to his half-sister Ankhesenamun and died without heirs to carry on his heritage.

Episode 1: In 1332 BC, Egypt is the most powerful nation in the world and there´s an internal fight for power. In Thebes, Akhenaten, or Amenhotep IV, is poisoned by a servant. His nine-year-old-son Tutankhamun takes the throne and marries his half-sister Ankhesenamun to have a pure bloodline heir. Due to his youth and Vizier Ay´s decisions as a counselor member, the people deem him weak. In ten years, Tutankhamun finds his kingdom facing economic problems and a plague weakens his army and kills his people. Tutankhamun is decided to gain control of his kingdom, show his people that he is a strong pharaoh, and face his enemies, even when he is left to death by General Horemheb and his friend Ka.

Episode 2: A half Mitanni half Egyptian woman, Suhad, finds Tutankhamun deadly hurt. She takes him to her village and treats him. Betrayed by his inner circle, Tut, his loyal soldier Lagus and Suhad, head to Thebes to impede that Ka marries Ankhesenamun and becomes pharaoh. Tut interrupts the wedding and kills Ka, he tells the people that he is Tutankhamun, their pharaoh. Tut falls in love with Suhad and decides to make her his wife, what disturbs Ankhesenamun because both women are pregnant.

Episode 3: Tut offers a treaty of peace to the Mitanni King, but the King decline it. Without another alternative, Tut leads his weakened army in a sneak attack through a secret entrance to the enemies´ territory. Meanwhile, in Thebes, the High Priest, Amun leads a revolt to kill Tut. Ankhesenamun kills Suhad. Tutankhamun is hurt during his victorious battle, even so he decides to return to Thebes to face and destroy his enemies. After killing the High Priest, he doesn´t resist to his injures and die.

Comment: Without any doubt, my favorite character is Tut; he is sweet, tender, generous, but he is also a leader. Tut knows what he wants, where his place is, and what he has to do to destroy his enemies. He is smart and wise; he makes great decisions and it infuriates his enemies.

His problems start when he grows up and decides that it is time to rule Egypt. He faces many problems; Horemheb and Ay also want the throne, and the High Priest wants to keep the cults to many gods.

With so many problems, Tut needs a pure blood heir to carry on his heritage. His marriage is a burden for him, as well for Ankhesenamun, who is in love with Ka. In addition to that, Ankhesenamun and Ay don´t approve his romance with an half Mitanni and peasant; they make plans to get rid of the woman, but Suhad is Tut´s protégée.

Suhad is too naïve; she trusts Ankhesenamun, big mistake. The royal queen prepares an ambush to Suhad; Lagus saves the woman. However, Suhad doesn´t have the same luck the second time.

The scenery is wonderful; it seems you are in Thebes, in the desert. They reproduced the palace, temples, sculptures and hieroglyphs very well. You feel as if you are transported to the ancient Egypt. It´s interesting because the series shows us a little of that ancient and curious culture, its gods, legends, habits, and mythologies.

The characters´ costumes are wonderful too; long, colored, embroidered and exclusive dresses, skirts, and tunics; the colors are very vivid and attractive. At least, the ones Tut, Ankhe, Ay and his son wear. The characters wear jewelries and show you how they were rich and prosperous.

The series also shows the cults to the gods; they have a god for everything: sun, war, fertility, wisdom… People have to pay tributes and homage to the gods; the temples are destined for the priests and the royal family.

Well, I loved it! I´ve watched the series three times. If you like fantasy, mythology and are curious about Egypt, it´s a great opportunity to know a little more about that ancient culture. It´s based on real events, but it has its magic.

This series fascinated and inspired me to write ‘Tut Reborn’. I wanted Tutankhamun to have a different ending and I thought why not? Why not? I love mythology and I mixed some facts of Tutankhamun´s life with mythology and fantasy. 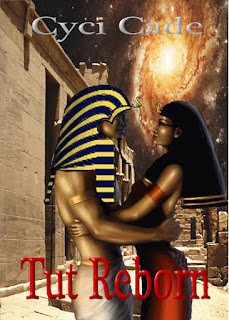 If you want to receive this book (pdf and mobi files only) for free in exchange for an honest review and comments on Amazon, Goodreads and social media, please e-mail me (I need your name and blog url). cycicade@gmail.com
at June 22, 2016