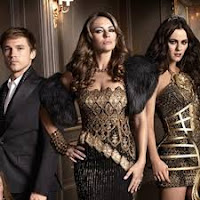 Blurb: The 10 episodes drama is an adaptation of Michelle Ray´s novel, Falling for Hamlet. With King Simon´s death, Helena and Cyros join forces to keep the monarchy and their comfortable position as queen and new king.

Helena´s plans don´t work as she expects. As she´s about to lose her title, she has to find another way to keep her position as queen; then, she decides to frustrate Cyrus´ plans and prove that Liam and Eleanor are king Simon´s children.


Comment: Full of twists, turns and new enemies, The Royals season two starts a little slow, but the end is full of surprises when the assassin of King Simon is revealed, as well Prince Robert´s fate.

New characters join the crew like James Hill, Princess Eleanor bodyguard. I like this character, he´s older and he is there to protect her. He doesn´t have second intentions; on the contrary, he helps Imogen, princess´ friend, and Jasper in his mission to find Simon´s assassin.

Other new characters are Jeffrey Stewart and his daughter; he has a plan to destroy the royal family. However, his daughter disapproves it when she knows Prince Liam and the truth about Dominique´s death is revealed.

Ted Pryce is a big surprise; the “loyal friend” reveals a dark side. He is totally insane, haunted by his wife death. He becomes the villain of the story. This character will shock you.

Helena changes a lot. All of a sudden, she becomes a different woman. You don´t see that cold-hearted woman who was fighting for power no matter what. She seems a little fragile and resigned, but she continues strong.

Helena tries to build a relationship with her children. She tries to be a real mother. It looks a little superficial, fake, and irrational; however, it seems to work because Eleanor shows the first signs that she can change and become a better person.

Season one was better. I confess that I was a little disappointed when season two started because some things didn´t make much sense, but the last four episodes were very interesting.

Let´s wait for season 3. Will Eleanor forgive Jasper? What will happen to Prince Robert? What new surprises wait for us?
at June 17, 2016