Blurb: Leif Erikson abandoned the settlement in Labrador, Canada, when the ferine attacked and murdered his small crew. A band of families stayed behind to rebuild.

Arud Bergson lives in the Outlands far from any other Viking village. His father is two-days late coming home from market leaving Arud to protect his mother, grandmother, and sister, Lykke, from arctic shape-shifting wolves who can break their bonds with the Dreadlands under the light of each full moon.

Called the ferine, they are a matriarchal species birthed by the she-wolf that nursed Romulus and Remus. While hunting, an anomaly occurs: a ferine takes Arud’s kill in broad daylight. His mother sends him and Lykke, who has a sickness from birth, on a three week journey across the realm to Vithalia City where they will stay with an uncle they have never met.

They journey for only several days before the rogue ferine takes chase, forcing them to launch into the river and over the falls. At the bottom, Lykke is missing. So is Arud’s pack with his supplies, crossbow, and bolts. He finds Lykke in the caves beneath the falls then meets a strange girl named Scalvia who leads them to her home where he can retrieve his pack. 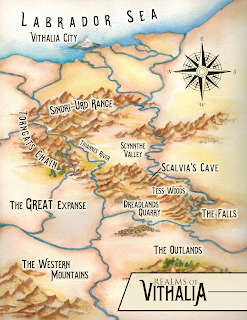 Arud’s world is shaken and family deceptions unravel, when he learns his sister may be the key in a century old prophecy and a sorceress may be stalking them. The stakes are raised, and getting safely to the city in the sea becomes more than a quest. It becomes survival.

Comment: The story develops in a good rhythm; secrets are revealed at a proper time without disturbing the pace of the story; it keeps you interested in the book. Each chapter has new information what turns the story interesting and keeps it moving forward.

Arud has a task, to take his sister Lykke to Vithalia City before the next full moon; it´s a long and dangerous trip. Considering the fact that he doesn´t know why he´s doing it and what he´s family is, it seems to become an impossible mission. So many things happen during their journey that you believe they won´t make it.

The book is full of action and unexpected events, you don´t have time to relax and take a deep breath because there´s always something new happening.

Some events are predictable, but it doesn´t spoil the surprise; there are always new elements.

When other characters cross Arud and Lykke´s path, a tense atmosphere involves you. Are they trustworthy? You´ll see that even the reliable ones have a dark side and hidden interests.

In the middle of all of that, Arud has to understand what is happening to him. His body is changing, as well his sister´s body and it scares the hell out of him. He needs answers, but can he trust the ones that are around him and seem to know more about his story than him?

An unexpected ending. I confess that I was expecting a different ending. I thought that things that happened in the first book would happen only in the second or third one. However, it isn´t a bad thing; on the contrary, I´m more curious about the story.

What comes next? Let´s wait and see.

It´s a good book. I liked it very much!

Click here to read the interview with the author.